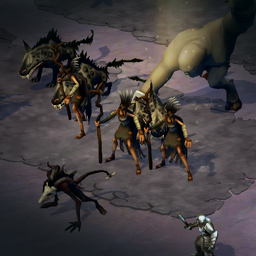 Tactical battles pit two opposing forces against each other, giving the player more control over the outcome of combat. Units take turns based on their Initiative values: the higher the Initiative, the sooner a unit will be able to take its turn. During a turn the active unit can move a number of tiles up to its maximum "Moves" and then take an action. Actions consist of attacking, casting a spell or using a special ability; and are displayed at the bottom of the screen near the current unit's portrait. The "Initiative List" on the left side of the screen can be used as a reference for what order units will be taking their turn. In addition, some spells have casting times. When you are channeling a spell with a required casting time you can use the initiative list to check when it will finish casting. If you would like the AI to take over for you, click the Play button at the bottom right of the screen. Press the pause button if you ever wish to resume manual control. To instantly resolve the rest of a battle, click the >> top at the bottom of the screen. Combat will end when all forces from one side are defeated.